Free targets for everyone!!! 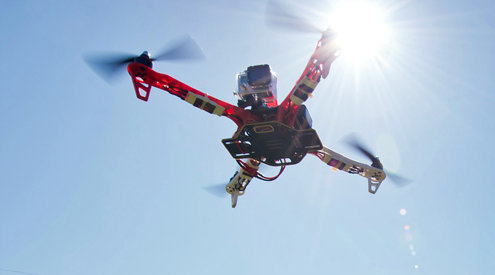 WASHINGTON — Thousands of unmanned aircraft systems – commonly known as drones – could be buzzing around in U.S. airspace by 2015 because of a law passed last year, aiding in police investigations, scientific research and border control, but also raising safety and privacy concerns among some lawmakers and advocacy groups.
Already, drones are in use to count sea lions in Alaska, to conduct weather and environmental research and to monitor drug trafficking across our borders. In fact, 327 drones already have been licensed by the Federal Aviation Administration to fly over U.S. soil.
MORE
Posted by wirecutter

Email ThisBlogThis!Share to TwitterShare to FacebookShare to Pinterest
Labels: Fuck the feds

Thee FAA wouldn't bother with Licensing the small versions like you see here, thats just an opinion of course. They must be talking about the larger ones that would fly up in the national airspace structure, they'd be well out of reach operating at 25000 or there abouts.

Whadduya think, buckshot, or will #4's do?

Ya, targets until they send a bigger one over with a hell fired missile aimed at your house. it is coming ... be prepared.

I should have bought that 10 gauge I saw at the gun show the other day. That and some #4 goose loads will fix them right up.