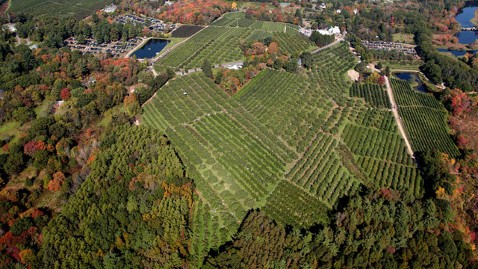 Mark and Marcia Rosenthal of Boston, Mass., got lost while apple-picking at Honey Pot Orchard in Stow, Mass., Oct. 22,2011. (Courtesy Honey Pot Hill Orchard)
There must be something in the water in Massachusetts this year.
For the second time in a month, police have responded to a 911 call from a couple stranded — and lost — on a farm outing. This time, the rescue appeal came from an apple orchard.
When Mark and Marcia Rosenthal of Boston went apple-picking on the afternoon of Oct. 22, they didn’t expect it to end with a rescue.
According to the farm’s owner, the two wandered too from their parked car at Honey Pot Orchard in Stow, and as night began to fall, they became frightened that they wouldn’t be able to find their way back. The Rosenthals called the Orchard’s main line, but when no one answered, they called 911.
Police arrived at the orchard’s entrance and told the owners about the problem, directing them to a landmark where the couple was waiting to be rescued. Julie Martin-Sullivan, who owns the family business with her brother, said they sent workers right out to pick up the Rosenthals.
“So my brother drove out in one of our buggies to pick them up, and the gentleman was being funny and said, “So how many rescues a year?” And my brother replied, ‘Well, through 85 years of business, none.”
Martin-Sullivan said the orchard is about 200 acres, and the Rosenthals had wandered about a half-mile or three-quarters-of-a-mile from where their car was parked.
“You know, we have a hedge maze too. So we said to them after, ‘We have a hedge maze and we’re not gonna let you in,” Martin-Sullivan joked. “He was a comical guy.”
Mark Rosenthal had been an on-air meteorologist for a Boston news station for many years, Martin-Sullivan noted.
Earlier this month, police rescued a family lost in a corn maze in Danvers, Mass.
ABC News


*****
Yeah, so I hope this is a reflection on sissy city folks and not on the general US public as a whole. I mean, lost in 200 acres? Of orchard with it's neatly laid out rows?
Let me let them in on a little secret:
Head in the general direction of your car but bear slightly to either the left or right, using the sun as a guide. When you hit the perimeter of the orchard (that's where the neat rows of trees end), travel along the perimeter in the opposite direction of your correction. In other words, if you bore to the left, take a right when you hit the end of the orchard. That's where your car will be.
Or you can find somebody else in the orchard and ask them for directions. That'll work too.
Fuck, has this entire Nation lost it's ability to think for themselves?
Posted by wirecutter

Email ThisBlogThis!Share to TwitterShare to FacebookShare to Pinterest
Labels: WTF?

Welcome to the United Liberal States of Obama (formerly known as the U.S.A.)....
It would be kind of fun to go into the OWS crowd in the middle of the night and set up a maze around and through them... I'd pay to watch that!