So, let's say the gun confiscations have begun after the intial grace period where you can turn in your guns voluntarily and you happen to notice a DHS/BATF/Homeland Security assault vehicle whipping past you on it's way to yet another raid. 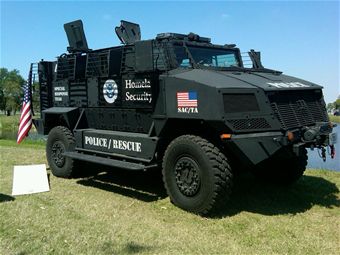 You know it's Homeland Security or BATF because these motherfuckers love to announce themselves with big vehicles and markings.
So what do you do? Do you thank the Good Lord above they're headed away from your house? Do you call your buddies and warn them? Do you make a quick SALUTE report so that you can add that to your intelligence folders?
Wrong. Follow them at a discreet distance and when they get to where they're going, pull out your rifle, assume a good firing position and commence to shooting the motherfuckers. You take out as many as you possibly can. If they're wearing armor, shoot their fucking legs out from under them. Make them pay.

Look, let me lay out a few facts for you. They will be your enemy and they will eventually be coming for you. The simple fact of the matter is there's a hell of a lot more gun owners than there are agents. Are you willing to let a few thousand of them disarms millions of us? Fuck that shit. Another simple fact: The average Door Kickers are not counter-terrorism experts, no matter what they believe - they are fucking bully boys that depend on surprise and overwhelming force to do their 'job'. You take that element of surprise away from them and it will fuck up their whole cha-cha. I guarantee you that if you shoot just one of them as they're stacked up outside another Patriot's door, that raid will not happen. It will fall apart.
Again, Patriots - If they want a war, let them start it but we'll fight it on OUR fucking terms, on OUR ground, with THEIR blood. Battles and wars are not won by playing nice. You attack, you do it savagely, and you do it relentlessly. We will not win by staying on the defensive.