Concerning the post a little further down HERE, WiscoDave sent in the following (and clearer) photo of the suspect and his supposed backpack.
Yes, it does look like his arm instead of a backpack. Matter of fact, it's pretty fucking obvious it's his arm and elbow. A blind man can see that. Was this photo doctored? Possibly, I don't know. But it seems pretty fucking suspicious that he's simply walking away from the scene instead of running like everybody else.

Wildriver just sent this in via email:
I don't know that the suspect is walking, it seems his elbow is quite high and his forearm is level with the ground, that would be more in keeping with a running stance. Just a thought, nothing more.One thing this has accomplished......we don't hear anymore about Korea do we?

Also Kelly commented in the original post that the photo of the suspect wasn't taken after he was caught but it was an image taken by a neighbor's security camera of him before he got into the boat. That's why he appears to be uninjured (or at least not seriously injured) and on his feet. 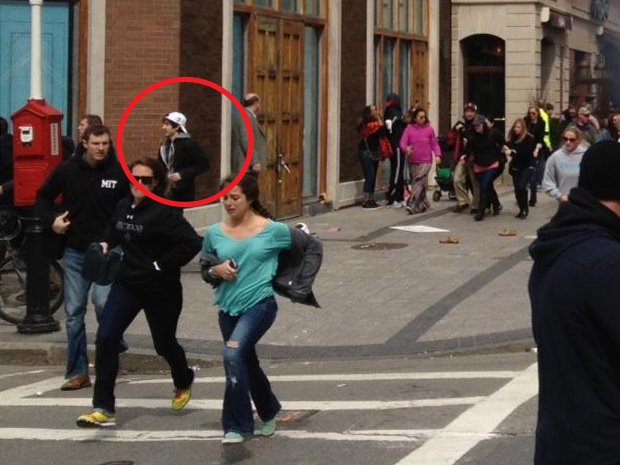 Hey, if I posted something and you can disprove it, explain it or at least raise doubts about my posting, by all means comment or send it in. This is not a news site and never have claimed to be, I just post shit that I've looked at and seems reasonable. And yes, I do know how to admit I'm wrong - I'm married, remember?
I know y'all probably don't believe this but I would love to have proof that this was the work of terrorists instead of our own government and that the feds aren't trying to cover anything up. I would be absolutely thrilled to admit that I was totally wrong in my doubts. Really, I would. Unfortunately, with our current regime's leader for covering shit up and underhandedness, I tend to doubt anything the government has to say until proven different.
Yes, there are still questions that are unanswered, Danne's comment about the dogs not detecting the bomb being the biggest one, but with the help of you readers, things are being explained. And I do appreciate it, temps here were in the mid-80s and those tinfoil hats do get hot.
Thanks to both WiscoDave and Kelly for their input.

By the way, I noticed a shitload of hits on that other post. If you linked to it, please send this post along too. Let's keep the rumors and false facts down, please.
Posted by wirecutter