Wishing y'all a great Thanksgiving

Supposed to be calm and dry tomorrow, but I read there's something like 4 1/2 feet of snow in the mountains where I hunt with another 2 feet this weekend.
I was planning on an early morning hunt but all that talk about deep snow canceled that shit out.
In other words, FUCK THAT!
I'm gonna get up and throw some backstrap on the smoker, go back to bed and then head over to Mom and Dads' place around 2 for dinner.
Other than that? Who cares as long as I'm warm.
Posted by wirecutter 7 comments:

Sorry I don't have anything witty or thought provoking to entertain you with tonight, but I just got home from a 13 hour shift. It's 9:45 at night and I just got fucking home. And I get to get up in a few hours and go do it again.
I used to tolerate the Holidays until I started working in a grocery warehouse. Now I fucking hate them. Seriously, all Thanksgiving, Christmas and New Years means to me anymore is a paid day off.
Posted by wirecutter 5 comments:

How many of you consider yourselves good with your handgun, be it revolver or automatic? Most of my shooting readers do, I'm sure.
How many of you are good with either hand to the point that you're comfortable carrying your handgun in a holster on either side?
Uh-oh.
I was lucky enough to break both of my hands 3 months apart as a youngster, plus I have a right handed pops who's partially blind in his right eye. Because of that, I can shoot a handgun equally well with either hand without even thinking about it. A rifle, not so well. But I'm working on it.
My point being is this: what do you do when you cop a round in your shooting arm, your husband or wife is depending on you and you don't know where your babies are?
Fuck, people. Spend a few extra bucks and practice drawing from, switching to and shooting from your off hand.
It's worth the expense.
Posted by wirecutter 7 comments:

Getting back to the motherfucker that protested the Grady NM Coyote Hunt:
He may be the best thing that ever happened to that school. I've gotten that link from people all over the country and I'm thinking I'm not the only one.
Me and Woody are kinda sorta tossing around the idea of making next years' shoot and if we can't make it we'll send a fucking check and I don't think we're alone here.
I bet Gradys' schools are gonna score big over this.
I can see it now:
Me and Woody roll into town but can't find a parking spot because people from all over the western US had the same idea. We got coyote hunters, we got outfitters and professional guides, we got deer hunters that want to learn to coyote hunt, we got folks that are there for the carnival that set up on the outskirts of town. We got folks that are there for the town-wide garage sale, folks that are there for the hotcake and burrito breakfast, we got folks that are there to get laid.
But best of all, we got a half dozen PETAphiles that are quivering in fear in a corner of the school parking lot trying to build up courage to throw paint on somebody.
Posted by wirecutter 4 comments: 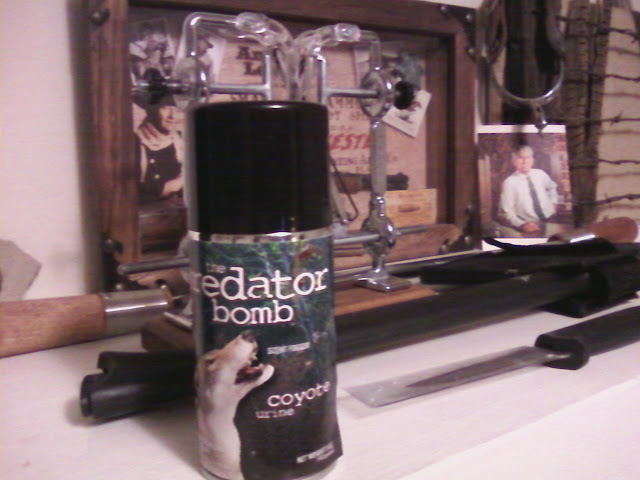 Last weekend was Mamas' 70th birthday. I spent a few minutes with her but not near the time I was expected to as I found out Monday. And Tuesday. And Wednesday, Thursday and motherfucking Friday.
So Saturday morning I called and asked if she wanted to drive out to the BassPro with me and do a little shopping. She was more excited than I had hoped - she loves that place as much as I do.
I bought her a nice heavy sweater, some winter wool socks and some ammo, then got myself a winter hunting parka (Friday night was a bitch) and then I saw some coyote piss in a can.
Had to have it......
Then we went to Piggy Paradise (thanks, Woody) and scored her a nice marinated pork loin and bacon, then headed to the liquor store for her favorite wine.
It was a nice day. Me and Mama got to spend some time together, she got some stuff just for her and I got some piss in a can.
And what did I do with the Coyote piss? I hit every fencepost, tree and structure in my backyard with it. CharlieGodammit has been going fucking nuts for the past 2 days. He cannot drink enough water......
Posted by wirecutter 5 comments: 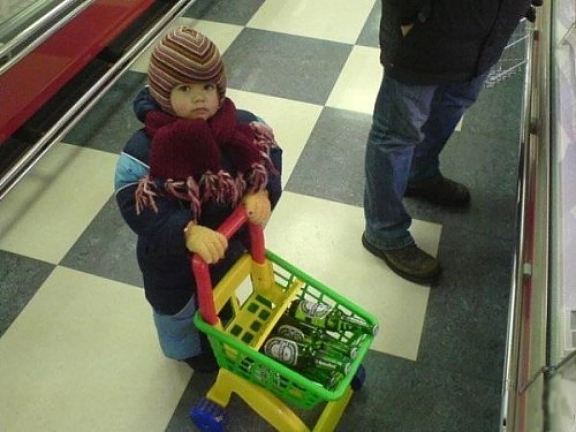 Cliff Sagnotty, who moved to Grady, NM (pop. 98) from Des Moines, IA this summer, said he is shocked by the local high school girls athletic department's sponsorship of a coyote-hunting contest Nov. 26-27 to raise funds for uniforms and equipment. "That is stepping outside the boundaries of what I think a school should be doing for the community," he told the Albuquerque Journal. "And it's also teaching students just to kill."
-Clovis News Journal.

Steve, who sent this to me remarked "Leave it an outsider to start trouble."
Ain't that the truth, Steve.
Now if I might add a couple of comments of my own.....
First of all Cliffy, you now live in a town of 98. Chances are, 96 of those residents now despise you and that's if you're wife isn't a hunter. If she is, the count went up to 97. You see, hunting is pretty much a way of life in any rural American town but especially out west. There are towns out here that shut down their schools on the opening day of deer season because they know nobody's going to show up anyways.
And the hunt was a fundraiser for athletic uniforms and equipment. Again, you live in a town of 98. Your options for raising bucks is extremely limited here. Bake sales are not an option. If everybody in town bought 2 cupcakes at a buck apiece, you're only up a couple of hundred bucks. Car wash? Naw, unless it's a nekkid carwash.
A coyote hunt brings in entry fees, probably quite a few outside hunters (which also brings revenue into the town), and pelts that can be tanned and sold to add to the athetic fund. And I can just about bet you that the hunt probably doesn't even make a dent in the local coyote population.
And finally: Just go back to where you came from. You remind me of the folks that move out of town for some country living and then complain about the noise and smells coming from your neighbors' farm.

Somebody deserves to get coyote bit

Obviously a semi-tame coyote, probably used to getting handouts.
But this guy's fucking around with this coyote, forgetting that it is a wild animal and very capable of doing some real damage if provoked.

Once again, Hillary proves what an ass she is.

WASHINGTON (AFP) – US Secretary of State Hillary Clinton Sunday renewed her backing to try "war on terror" suspects in civilian courts, but refused to be drawn on the fate of the alleged September 11 mastermind.
The Obama administration was dealt a severe blow last week when a New York jury cleared Tanzanian Ahmed Ghailani of all but one of 286 charges brought against him for the 1998 embassy bombings in Africa.
Ghailani, 36, the first ex-Guantanamo Bay inmate to be tried in a civilian court, will still serve at least 20 years in jail and could be sentenced to life imprisonment, after being found guilty of conspiracy against US property.
But the case thrust into the spotlight the difficulties of trying Guantanamo Bay inmates in civilian courts, amid concerns that evidence against them is tainted or extracted under duress during secret CIA renditions.
Clinton told CBS the US administration did not need to rethink the strategy of trying to bring terror suspects into the civilian courts.
"The terrorists who are serving time in our maximum security prisons are there because civilian courts... have a much better record of trying and convicting terrorists than military commissions do," she said.
"And in fact this defendant having been convicted will be sentenced somewhere between 20 years and life."

A sentence of between 20 years and life is a just sentence for being the mastermind of an act of terror that killed more than 200 people?
Are you fucking stupid?
And let's not forget that because he was tried in a civilian court he'll also be eligible for parole in a few years.
Posted by wirecutter 3 comments: